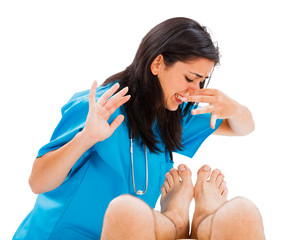 One doesn’t have to work in the medical field or as a caregiver to come across some of the worst odors.

We often smell a lot of funk through out everyday life depending where we’re at and who we are around.

It’s just those of us who’ve held jobs within a healthcare setting tend to and are more prone to encounter bad hygiene at an enormous rate as our workplaces cater primarily to people and wellness issues.

An array of individuals commonly walk through the doors and occupy residence at hospitals, clinics, nursing homes, and assisted living facilities.

Us people who undertake caregiver roles deal with people constantly all day long on a day to day basis with all type of conditions and ailments and are bound to definitely come into contact with notorious odor.

I remember how once, before I ever thought about working in the medical/ healthcare field, my mother and I were inside the emergency room of a hospital when this bum came in drooling from the mouth with a tall can of beer.

After he’d sat and been there for a while, a female medical technician who’d entered the lobby of the place from time to time finally went to respond to him.

Once she fully observed him and paid more attention to him she noticed his behavior, appearance, and the can of beer he had brought in with him.

The medical technician turned to look at my mother and I and said “Why didn’t you tell me he had a can of beer? She then said aloud, “Oh great, now I’m going to have to deal with his stinking feet”.

I internally sympathized with her because she seemed like a decent person of substance.

With all of this lady’s experience and familiarity within her field of work she knew just by looking at the man what she was in for by having to attend to him that evening.

Some people’s feet smell so bad that it’s impossible to get the odor out of fabrics.

There was a guy who came to my house once and he had his bare feet resting against the carpet of the room.

The odor had gotten trapped into the carpet and no matter how much I vacuumed the odor wouldn’t leave or fade away I even tried sprinkling baking soda to kill the smell and that was useless.

I ended up having to eventually pull up the carpet to throw it away.

I’ve also been in a house with a guy who’s odor was so bad the funk had gotten embedded within the mattress and he was well aware of the problem as he told me he had tried everything from ammonia to drive away the smell yet it was still set in.

These occurrences are nothing new.

I remember a neighbor of mine had to throw away her upholstered chair on account of another female neighbor who had smelled it up so bad.

A relative of mine had to throw away an article of clothing she had loaned to one of her great-nieces because her underarms had stunk up the material and ruined the chance of her ever wearing the item again.

There are so many experiences I could share too many to write about, stories in which would make one holler, “Woo!”

This site uses Akismet to reduce spam. Learn how your comment data is processed.